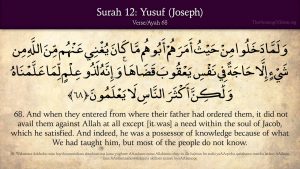 According to the Bible Yusuf lived for 110 years and for the most part of his life spread the word of God to the Israelites. In Surah Ghaafir (Chapter 40) in the holy Quran, it is mentioned that “Yusuf came to his people with clear signs before, yet you (Israelites) continued to doubt his message. Thereafter when he died, you (Israelites) said “Allah shall send no messenger after him’. Thus Allah leads astray those who transgress the limits and are given to much doubting.” (40:34).

Some major lessons that come out of the story of Yusuf from his childhood to attaining full age deal with the themes of jealousy, affection, loyalty, love, hardship, as well as challenges in family relationships and living a virtuous life that each one of us comes across. The purpose is to show Muslims how to cope with these challenges and overcome human temptation and frailty.

The story of Yusuf is more relevant in our globalised world today than it was in earlier times. In our time sex between men and women outside marriage is seen as a sign of freedom and self-confidence. The youth of today have a major dilemma right from the age of attending high school to moving forward to other stages in life. If they remain virtuous they are seen by their peers as backward and old fashioned. If they join the fornicating crowd, they are guilty within and suffer from a sense of sin. The story of Joseph gives the youth of today a high moral ground to stay firm on their faith and feel proud of their spiritual purity and high moral values.

There is a lesson too in the story of Yusuf on equal treatment of children. While parents treat all children equally it is natural for parents to show their affection to some children a little more than they show their other children either because of their young age or certain characteristics which may be peculiar to them. It is also natural for siblings whether from same parents or multiple parents to develop jealousy and competition among them and form groups. This is natural and one should not feel guilty about it as long as no injustice is done to anyone in the family and all are given same opportunities and are treated equally.

The story of Joseph shows human frailty at its weakest point which is the desire to mate with the opposite sex with no holds barred. It also shows how beauty in a woman or good looks in man can become a test. The story teaches how to overcome temptation or refuse an open invitation to sin by invoking the help of Allah.

Sometimes a refusal to commit sin can also exact a price as it did in the case of Joseph. Joseph not only asked for Allah’s protection from the enticing lady but also prayed to be sent to prison in order to stay away from her because she was determined to take him to bed in his master’s house. The lesson is that sometimes you pay a price for being righteous. Truth lands you in trouble while falsehood can give you sort-cuts. But in the long run it is the truth that prevails. There is light at the end of the tunnel, no matter how long the tunnel is. The longer the tunnel the greater is your reward both in this world and in the hereafter. Every cloud has a silver lining. There is ease after every hardship as promised by Allah in another Surah (94:6)

The story explains the concept of destiny clearly without placing any limitation on human choice. Yusuf had never dreamt of attaining the position of authority after his imprisonment. He did not even know what will happen to him once he was freed from jail. It was Allah who had planned this shepherd boy to become the Governor of Egypt and become the most trusted adviser of the Pharaoh.

Allah has plans for all His servants. These can be long term but if you place your trust in Allah as Yusuf did, then the sail of your ship is safe in Allah’s care and you need not worry about your life, as Yusuf did not worry about his future. Allah responds when you call Him. He delivers you from difficulty just as he took Yusuf out of prison, restored his honour, gave him a good wife and a lovely household and placed Joseph in a high profiled position in Egyptian society.

Almost all Prophets of Allah went through a period of training and learning before they were given the divine mission. Joseph’s training started from the tender age when he needed to be looked after by his brothers but was abandoned by them in a deserted place. It lasted more than 17 years including an internment period of 13 years until he was chosen by the Pharaoh as the Governor of Egypt at the age of 30. During this period, he learnt patience, forgiveness and wisdom and became a good interlocutor, planner and administrator.

We also learn that forgiveness is a virtue which all great men have. His brothers deprived him of childhood, took away the best years of youth from him and yet when he was all powerful and mighty to settle score with them, he invited them to have a meal with him and treated them kindly.

Other lessons from the story of Yusuf are: dreams have meanings but not everyone can interpret these correctly; if a woman decides to tempt a man and trick him into it, it is very hard to beat her trick; remembrance of Allah is to be kept kindled at all times as Yusuf’s conversation with his prison inmates shows; laws must be observed as Yusuf did not just detain his brother Bin Yameen but worked out a strategy to prevent his return with his brothers; patience and perseverance pay even though it may take time; it is important you ask for something if you want it just as Joseph did in asking for prison from his master and a high position for himself from the Pharaoh.

Finally, the biggest lesson that comes out of these stories is that they are retold in the holy Quran not for passing time or for entertainment but to teach important lessons to mankind and order the lives of believers on the high moral ground of truthfulness, honesty and steadfastness. This is the divine message of Allah Subhanuhu wa Taala taught to mankind through the holy scriptures and His chosen messengers.