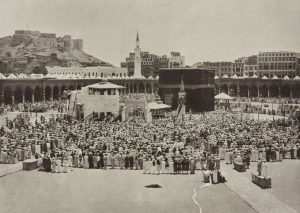 In many non-Arabic speaking countries, the Eid khutba is read in Arabic following the wajib  Eid Salat. However, its summary is often delivered in the form of a speech in the local language while the faithful are still arriving for the congregation. This takes away the time for reciting  Takbeerat before the Salah. The speech also conflicts with the requirement of delivering the khutba after the Eid Salat. Many mosques, such as the Regents Park Islamic Centre in London, are experimenting with a bilingual khutba, combining English language with Arabic, with the latter as the core of the khutba. The scope for this adjustment is quite wide and each mosque follows a certain method according to the guidelines provided by its religious leadership.

In the month of Shawaal, 1440 AH, I was travelling in Muscat where I attended the Eid Salat in a mosque located in the municipality of Azaiba. I found the Arabic khutba well drafted and perfectly balanced between the narrative and references from the holy Quran and Sunnah. It sounded perfect for an Eid khutba because its theme was ‘Ease in Worship’. It was most relevant as it was being delivered to the faithful after 30 days of intense ibada of saum, salat, zakat, qiyam, including qiyamul lail, good deeds and charity undertaken in the hot summer of 2019. On return to London, I translated the khutba in working English while retaining the Ayahs of the Holy Quran and Ahadith in Arabic, as read in that khutba.

I believe this hybrid khutba in English and Arabic could be taken as a working model to be read in an English-speaking country at Salat al Eid al Fitr. However, religious interpretations may vary and mosque leaders may not be entirely happy delivering one khutba in two languages simultaneously. In such instances the original Arabic khutba may be read and its text should be translated in the local language and circulated to the congregation to read and take home. The Faisl Mosque in Islamabad, Pakistan is following this practice. The original Muscat khutba which I heard is available at the official website of the Ministry of Endowment and Religious Affairs of Oman, https://www.mara.gov.om/jumaa/images/jumaa1440/111.pdf , as well as here {=}

Dear brothers and sisters
Fear Allah and know that the teachings of the religion of Islam aim at removing difficulty and hardship and establish ease and comfort. The objective of worship is not to provide discomfort beyond human capacity and make Muslims uncomfortable and fatigued. Allah did not bestow the Qur’an on humans to make them unhappy. He does not wish to place any burden on us; He only wishes to cleanse us and perfect His blessings on us, so that we may be thankful.
ما أنزلنا عليك القران لتشق [20:2]

Being our creator, Allah knows that human beings are weak. Allah does not burden us with anything more than we can bear. Neither does Allah impose any obligation on us in worship which we cannot perform. For this reason, Allah has reduced our Salat to only five times a day; fasting to one fixed month and pilgrimage to only once in the lifetime. Allah’s obedience and worship is easy to carry out because Allah wants to lighten our burdens because we have been created weak.
يريد الله ان يخفف عنكم و خلق الإنسان ضعيفا
[3:28]

The fact that Allah wants the faithful to have ease and not suffer hardship in their worship is confirmed in the commandment of fasting during the holy month of Ramadan.
يُرِيدُ اللّهُ بِكُمُ الْيُسْرَ وَلاَ يُرِيدُ بِكُمُ الْعُسْرَ وَلِتُكْمِلُواْ الْعِدَّةَ وَلِتُكَبِّرُواْ اللّهَ عَلَى مَا هَدَاكُمْ وَلَعَلَّكُمْ تَشْكُرُونَ
[2:185]

Ease and comfort is intrinsic to fasting and even at the end of fasting we are rewarded by Allah not once but thrice: first; at the time of Iftaar when we break our fast with the Rizq provided by Allah and realise its true value in hunger and thirst; second; at the time when we celebrate Eid at the end of the holy month of Ramadan and benefit from Allah’s blessings and forgiveness; and finally; when in the Hereafter Allah will reward those who fasted for Him in submission and prayer. Allah provides us with many opportunities for thanksgiving and forgiveness, only if we are prepared to take these with both hands.

Dear Muslims
Islam demands total submission to Allah and His commandments which place emphasis on mercy and kindness. Allah does not burden anyone beyond his capacity. Worship does not cause hardship to human beings. Instead, it brings them Allah’s blessings and enhances their faith, self-control, spiritual well-being and happiness. The secret of happiness for the worshippers lies in obedience to Allah and in doing good deeds:
يَا أَيُّهَا الَّذِينَ آمَنُوا ارْكَعُوا وَاسْجُدُوا وَاعْبُدُوا رَبَّكُمْ وَافْعَلُوا الْخَيْرَ لَعَلَّكُمْ تُفْلِحُونَ
[22:77]

In the context of good deeds and charity, Allah says what is offered in the way of Allah cleans the faithful and allows them to grow in purity:
خُذْ مِنْ أَمْوَالِهِمْ صَدَقَةً تُطَهِّرُهُمْ وَتُزَكِّيهِم بِهَا وَصَلِّ عَلَيْهِمْ إِنَّ صَلاَتَكَ سَكَنٌ لَّهُمْ وَاللّهُ سَمِيعٌ عَلِيم
[9:103]

In perfecting His worship, the faithful Muslim achieves great heights in manners and self-control. Our Prophet, may Allah bless him and preserve him was the best personification of good manners: In a Hadith the Prophet is reported to have said:
إنما بعثت الا تمم صالح الأخلاق

O Servants of Allah
It is important that our hearts remain filled with faith so that we can focus on what Allah has ordained us to do and forbidden us to abstain from. A faithful person’s heart desires nothing but the agreement of Allah and sets on no one except the remembrance of Allah. A servant of Allah leaves all his affairs to the Will of the Almighty and is satisfied in whatever his provisions present him with in this life. On the Day of Judgement such persons will be indeed declared successful and they shall inherit Jannah. Allah also preserves such person from the evil of others in this world.
قَالَ اللّهُ هَذَا يَوْمُ يَنفَعُ الصَّادِقِينَ صِدْقُهُمْ لَهُمْ جَنَّاتٌ تَجْرِي مِن تَحْتِهَا الأَنْهَارُ خَالِدِينَ فِيهَا أَبَدًا رَّضِيَ اللّهُ عَنْهُمْ وَرَضُواْ عَنْهُ ذَلِكَ الْفَوْزُ الْعَظِيمُ
[5:119]

Such a person does not worry about the mischief makers. He places his affairs in the hands of Allah and indeed none is worthy of trust as Allah.
وَاللّهُ يَكْتُبُ مَا يُبَيِّتُونَ فَأَعْرِضْ عَنْهُمْ وَتَوَكَّلْ عَلَى اللّهِ وَكَفَى بِاللّهِ وَكِيلاً [4:81]

There are various ways through which the heart of a believer finds peace in pursuit of a pure and clean life. This can come from worship, contentment, acceptance of what Allah has given and taken away, faith in the hereafter, zikr and glorification of Allah. The benefits of this are also many; these include a pure heart, peace of mind, baraka and happiness in home and family, spiritual strength, security and protection from evil deeds which divide humanity. Our prophet prayed:
الهم أني أسالك نفسا مطمئنه، تؤمن بلقاءك و ترض بقضاءك و تقنع بعطائك

Allah has said in the holy Quran that He and his angles send their blessings on the Prophet Muhammad; those of you who have accepted Islam, bless the Prophet and surrender to Allah’s guidance.
إِنَّ اللَّهَ وَمَلَائِكَتَهُ يُصَلُّونَ عَلَى النَّبِيِّ يَا أَيُّهَا الَّذِينَ آمَنُوا صَلُّوا عَلَيْهِ وَسَلِّمُوا تَسْلِيمًا
[33:56]