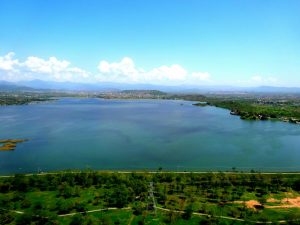 The example of life of the world is like rain which Allah sends down from the sky that irrigates the earth and produces food which men and cattle enjoy until the earth is adorned with beautiful flowers, fruits and greenery everywhere. Closer to harvest time, when people think they have obtained the most from earth and have mastery over it, Allah sends his command, by night or by day, to cause the earth to turn into a barren land as if it had never flourished before. Allah gives such examples for those who reflect. [Surah Yunus 10:24]

There could be no better example than the example of earth to illustrate the reality of life in the world which at the most can be counted as a few centuries for constructed buildings and at the most 100 years for human beings. In fact, by the time a person reaches hundred, if he comes to live that long, despite his wealth and status he is almost done with no movement left in his muscles, faded memory, lack of strength and capacity to live on his own without medical or family support. The same person may have moved mountains, conquered great battles and accomplished awesome feats in his youth; he may have been a fountain of knowledge and wisdom in his mature age; he may have been a great leader of a nation or a professional who invented and operated things for society but now in his late twilight years he has forgotten everything and lost his glitter. He can’t even eat properly, remember names or sit, let alone walk.

The earth which is the origin and final abode of man is precisely like that. With the water it receives for its sustenance from sky it gives out its best adornments when it is in its prime but it gradually begins to see its greenery turn into gold and leaves falling off its trees which then fly away in the wind leaving the earth barren and dry as if it had never seen spring before.

The sum total of what man does in his lifetime is pursuit of happiness in the form of chasing great ambitions and satisfying material and emotional needs. He works hard or is lucky by an accident of inheritance to have a successful business, achieve fame, live well, afford good food, good living, good cars and good company of others like him. Almost all the endeavours of human life from political governance and from successful financial investment to good economic management are centred around the attainment of these goals. Happiness comes from fulfilment of desires which are possible to obtain if you are successful materially.

Assuming one is able to acquire all this and more which perhaps the billionaire entrepreneurs of this world, successful leaders of great nations and world class generals and celebrities can claim to have, there comes a time when they start slipping off their success either because of ill health, old age or emotional breakdown.

Just when they think they have achieved all they wanted and could get with the press of a button, their age starts to catch up sooner than expected and their medical tests begin to show decay and decline in their bodies requiring drugs, therapies and staying away from their favourite foods and activities. Add a few more years and they are as good as a weakling with their grip on the control buttons loosening and their bodies turning into a barren collection of bones and muscles. Then like a harvest which is ripe and blown away by the autumn wind, the sceptre of time takes them six feet under as if they never existed before. All that remains is a gave number or urn for reference and for their next of kin to occasionally visit to lay flowers.

In the example in Surah Yunus above, the words “Our command comes by day or by night” أَتَاهَا أَمْرُنَا لَيْلاً أَوْ نَهَارًا are most significant. Just as some plantations have a longer life span but some others short, the life span of man varies for each individual. Death can come to anyone by night or by day irrespective of age. The founder of Apple, Steve Jobs was one of the most successful entrepreneurs but he succumbed to cancer and passed away at a very early age. The young Pharaoh Tutankhamun was even younger and yet he was one of the most powerful kings in the Pharaoh dynasty.

In this example Allah reminds men that although they live only once and die only once in this world they can see the example of earth, living and dying every year with the rotating cycle of spring, summer, autumn and winter and making a loop to start all over again.

This example challenges man to think. To ask why is he born at all if he is to die one day; why should he make any effort in life if the result of his toil is not permanent; and why can’t he stop being old or conquer death to live forever.

When he starts reflecting on the journey of his origin, development and destination, he becomes aware of the true purpose of life. He realises that the life of this world is an investment for the hereafter like the successful harvest which is stored in the granary for the rainy season. He realises that there is a Supreme being Allah who causes the weather to change, for rain to fall, for the earth to become wet and green and then turn dry and yellow. He knows that death is but a gateway into the next world. And he finally figures out that what he has been pursuing (happiness) is a short lived mirage. The real pursuit of happiness in life is to prepare for the everlasting world where there is no death and no autumn. Man does not need to chase success in the temporary life of a few decades which leaves him empty handed at the very time when he thinks he owns the world.