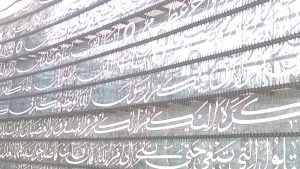 Tonight on the eve of the festival of Eid, two groups returned to the world of matter and material. One group comprised people who left their homes ten nights ago to sit in Etekaf and remember Allah day and night within the four walls of their local mosques. The other group comprised shayateen who were released from prison at the end of the holy month of Ramadan.

Tomorrow the tug of war between the two sides, aided and abetted by their respective followers, admirers, agents, facilitators, sympathisers and sponsors, namely Hizb-e-Allah and Hizb-e- Shaitan will commence again to last another 11 months until next Ramadan. The former group will be remembered asالمفلحون هم أولئك. The latter group will be remembered as اولئك هم الخاسرون .

Between these two sides will be a third group sitting on the fence watching the battle and waiting to see which group will win so that they can join them at the last moment and claim a share in their booty. They will be remembered as اولئك هم الفاسقون.