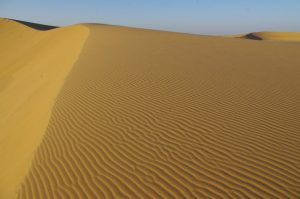 A Sheikh was commenting on the parable of Moses and Al-Khidr in Surah Kahf (Chapter 18 ‘the Cave’ in the Quran) which is well known to Muslims. He said the key lesson of this parable is that man cannot fathom the plan of Allah because it is beyond the reach of human logic and reason. This is very important to remember because man is born impatient and keeps moaning about small things and asks questions which in his opinion don’t make sense. In a way it is a good thing because it enables man to keep moving toward the frontier of knowledge the ultimate end of which is God Himself. But while he can be inquisitive he should not be disappointed if he doesn’t get the answer when he wants it. This is what happened to Moses. He kept asking “why” when he did not understand the apparently illogical actions of Al-Khidr. But what seemed illogical to Moses was perfectly logical in the larger scheme of things with the benefit of hindsight.

Then the Sheikh narrated a story to explain the strange ways of God which we can neither understand nor explain if we rely only on our human faculties.

The Sheikh said that God once asked the angel of death, Ezrail: “You have been taking away the souls of my servants on my orders and this is your job. Was there any time when you felt sorry for bringing death to my servants?” Ezrail replied: “Yes my Lord. On two occasions I felt sorry. The first time was when a ship was drowning and some people had escaped on rafts to save their lives. One of these persons included a pregnant mother. She had waited for a child for a long time and had become pregnant after much prayers and offerings. Because of the physical effort she made to save her life she was very exhausted and gave birth to a son on the raft. It was at that time you made me take the life of that mother, while her son was left alive on the raft all alone with no one to look after him and care for him in the dark blue sea.”

Ezrail said the second time he felt sorry for someone was when a king who claimed to be god decided to build a huge and beautiful paradise on his earth. He told his people to worship him because he could make them live in his ‘paradise’ as the reward for worshipping him. He diverted all the gold and silver and rubies and riches in preparing a magnificent garden with hanging vines, running streams of cold water and beautiful fountains. His workers built floors with emeralds and pearls and brought musk and amber from all over the world to decorate his ‘paradise’. When the royal garden was ready to be inaugurated by the king, he placed his one foot inside his garden and was lifting his other foot to enter it, you ordered me to take away his breath. I felt sorry for this king who could not even get a glance of what he had prepared in claiming to be god.”

God informed Ezrail that the helpless child on the sea and the man who claimed to be god were the same person. His name was Shaddad, son of Aad who lived in the area around present day Oman and Hadhramut. His ‘paradise’ perished with the lost city of Iram of the Pillars in the Arabian sands. Subhan Allah. Allah knows best.

The Sheikh was in his elements; so narrated another story to make this point. He said there were two men called Moses. They were born to two different Hebrew mothers whose fathers had died before their birth during the time when the Pharaoh had ordered genocide of all Hebrew infants because his high priest had told him that a child born to Hebrew mother will end his kingdom. One infant Moses was raised in the Palace of the Pharaoh who claimed to be god. The other infant Moses was raised by none other than the most honoured angel Gabriel on a secluded mountain. The Moses raised by the denier of Allah grew up to become a prophet. The Moses guarded by an angel grew up to be the man who made a golden calf and told the followers of prophet Moses this was their god. His name was Sameree. Strange are the ways of Allah, only He knows.

The Sheikh concluded by saying since we do not know Allah’s divine plan it is advisable to be always contented with His decisions. For “If Allah should decide to touch anyone with adversity, there is no one who can remove it except Him; and if He intends for you any good, there is no one who can prevent it. He causes His bounty to reach whom He wills of His servants. And He is the forgiving, the merciful.” [Surah Younus – 10:107]